The Black Flamingo by Dean Atta

A fierce coming-of-age verse novel about identity and the power of drag, from acclaimed poet and performer Dean Atta. Perfect for fans of Elizabeth Acevedo, Jason Reynolds, and Kacen Callender.

Michael is a mixed-race gay teen growing up in London. All his life, he’s navigated what it means to be Greek-Cypriot and Jamaican—but never quite feeling Greek or Black enough.

As he gets older, Michael’s coming out is only the start of learning who he is and where he fits in. When he discovers the Drag Society, he finally finds where he belongs—and the Black Flamingo is born.

Told with raw honesty, insight, and lyricism, this debut explores the layers of identity that make us who we are—and allow us to shine.

Click the cover above to get yourself a copy of The Black Flamingo. 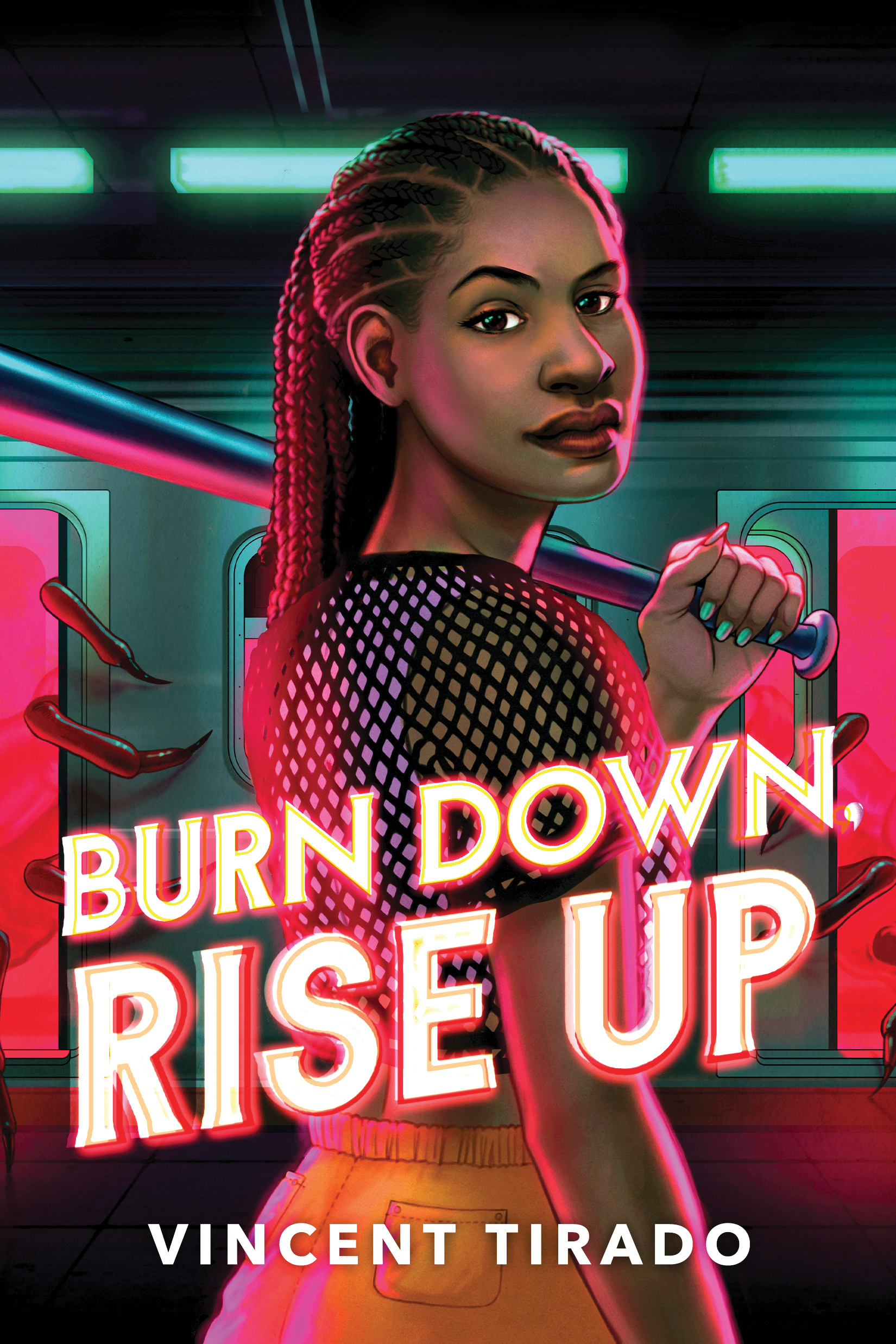 Burn Down, Rise Up by Vincent Tirado

Stranger Things meets Get Out in this Sapphic Horror debut from nonbinary, Afro-Latine author Vincent Tirado.

Mysterious disappearances.
An urban legend rumored to be responsible.
And one group of teens determined to save their city at any cost.

For over a year, the Bronx has been plagued by sudden disappearances that no one can explain. Sixteen-year-old Raquel does her best to ignore it. After all, the police only look for the white kids. But when her crush Charlize's cousin goes missing, Raquel starts to pay attention—especially when her own mom comes down with a mysterious illness that seems linked to the disappearances.

Raquel and Charlize team up to investigate, but they soon discover that everything is tied to a terrifying urban legend called the Echo Game. The game is rumored to trap people in a sinister world underneath the city, and the rules are based on a particularly dark chapter in New York's past. And if the friends want to save their home and everyone they love, they will have to play the game and destroy the evil at its heart—or die trying.

Click on the picture above to get your copy of Burn Down, Rise Up. 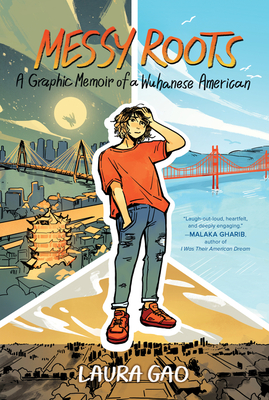 "Messy Roots is a laugh-out-loud, heartfelt, and deeply engaging story of their journey to find themself--as an American, as the daughter of Chinese immigrants, as a queer person, and as a Wuhanese American in the middle of a pandemic."--Malaka Gharib, author of I Was Their American Dream

After spending her early years in Wuhan, China, riding water buffalos and devouring stinky tofu, Laura immigrates to Texas, where her hometown is as foreign as Mars--at least until 2020, when COVID-19 makes Wuhan a household name.

In Messy Roots, Laura illustrates her coming-of-age as the girl who simply wants to make the basketball team, escape Chinese school, and figure out why girls make her heart flutter.

Insightful, original, and hilarious, toggling seamlessly between past and present, China and America, Gao's debut is a tour de force of graphic storytelling.

Get your copy of Messy Roots by Clicking the picture above.

What if It's Us by Becky Albertalli and Adam Silvera

Arthur is only in New York for the summer, but if Broadway has taught him anything, it’s that the universe can deliver a showstopping romance when you least expect it.

Ben thinks the universe needs to mind its business. If the universe had his back, he wouldn’t be on his way to the post office carrying a box of his ex-boyfriend’s things.

But when Arthur and Ben meet-cute at the post office, what exactly does the universe have in store for them?

Maybe nothing. After all, they get separated.

Maybe everything. After all, they get reunited.

What if Arthur tries too hard to make it work . . . and Ben doesn’t try hard enough?

What if life really isn’t like a Broadway play?

But what if it is?

Click the image above to shop for What If It's Us

Carry On by Rainbow Rowell

Simon Snow is the worst Chosen One who's ever been chosen.

That's what his roommate, Baz, says. And Baz might be evil and a vampire and a complete git, but he's probably right.

Half the time, Simon can't even make his wand work, and the other half, he starts something on fire. His mentor's avoiding him, his girlfriend broke up with him, and there's a magic-eating monster running around, wearing Simon's face. Baz would be having a field day with all this, if he were here — it's their last year at the Watford School of Magicks, and Simon's infuriating nemesis didn't even bother to show up.

Carry On - The Rise and Fall of Simon Snow is a ghost story, a love story and a mystery. It has just as much kissing and talking as you'd expect from a Rainbow Rowell story - but far, far more monsters.

Click the image above to purchase Carry On by Rainbow Rowell.

The Gentleman's Guide to Vice and Virtue by Mackenzi Lee

Henry “Monty” Montague was born and bred to be a gentleman, but he was never one to be tamed. The finest boarding schools in England and the constant disapproval of his father haven’t been able to curb any of his roguish passions—not for gambling halls, late nights spent with a bottle of spirits, or waking up in the arms of women or men.

But as Monty embarks on his Grand Tour of Europe, his quest for a life filled with pleasure and vice is in danger of coming to an end. Not only does his father expect him to take over the family’s estate upon his return, but Monty is also nursing an impossible crush on his best friend and traveling companion, Percy.

Still it isn’t in Monty’s nature to give up. Even with his younger sister, Felicity, in tow, he vows to make this yearlong escapade one last hedonistic hurrah and flirt with Percy from Paris to Rome. But when one of Monty’s reckless decisions turns their trip abroad into a harrowing manhunt that spans across Europe, it calls into question everything he knows, including his relationship with the boy he adores.

Purchase The Gentleman's Guide to Vice and Virtue by clicking the picture of the cover above. Wanted:
One (fake) boyfriend
Practically perfect in every way

Luc O'Donnell is tangentially--and reluctantly--famous. His rock star parents split when he was young, and the father he's never met spent the next twenty years cruising in and out of rehab. Now that his dad's making a comeback, Luc's back in the public eye, and one compromising photo is enough to ruin everything.

To clean up his image, Luc has to find a nice, normal relationship...and Oliver Blackwood is as nice and normal as they come. He's a barrister, an ethical vegetarian, and he's never inspired a moment of scandal in his life. In other words: perfect boyfriend material. Unfortunately apart from being gay, single, and really, really in need of a date for a big event, Luc and Oliver have nothing in common. So they strike a deal to be publicity-friendly (fake) boyfriends until the dust has settled. Then they can go their separate ways and pretend it never happened.

But the thing about fake-dating is that it can feel a lot like real-dating. And that's when you get used to someone. Start falling for them. Don't ever want to let them go.

Purchase Boyfriend Material by clicking the cover above. 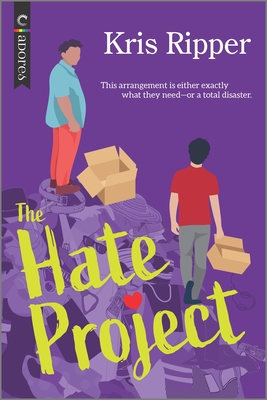 The Hate Project by Kris Ripper


Oscar is a grouch.

That’s a well-established fact among his tight-knit friend group, and they love him anyway.

Jack is an ass.

Jack, who’s always ready with a sly insult, who can’t have a conversation without arguing, and who Oscar may or may not have hooked up with on a strict no-commitment, one-time-only basis. Even if it was extremely hot.

Together, they’re a bickering, combative mess.

When Oscar is fired (answering phones is not for the anxiety-ridden), he somehow ends up working for Jack. Maybe while cleaning out Jack’s grandmother’s house they can stop fighting long enough to turn a one-night stand into a frenemies-with-benefits situation.

The house is an archaeological dig of love and dysfunction, and while Oscar thought he was prepared, he wasn’t. It’s impossible to delve so deeply into someone’s past without coming to understand them at least a little, but Oscar has boundaries for a reason—even if sometimes Jack makes him want to break them all down.

After all, hating Jack is less of a risk than loving him…

Click the picture above to purchase The Hate Project. The Kindred by Alechia Dow

To save a galactic kingdom from revolution, Kindred mind-pairings were created to ensure each and every person would be seen and heard, no matter how rich or poor…

Joy Abara knows her place. A commoner from the lowly planet Hali, she lives a simple life—apart from the notoriety that being Kindred to the nobility’s most infamous playboy brings.

Duke Felix Hamdi has a plan. He will exasperate his noble family to the point that they agree to let him choose his own future and finally meet his Kindred face-to-face.

Then the royal family is assassinated, putting Felix next in line for the throne…and accused of the murders. Someone will stop at nothing until he’s dead, which means they’ll target Joy, too. Meeting in person for the first time as they steal a spacecraft and flee amid chaos might not be ideal…and neither is crash-landing on the strange backward planet called Earth. But hiding might just be the perfect way to discover the true strength of the Kindred bond and expose a scandal—and a love—that may decide the future of a galaxy.

To Purchase The Kindred, click the picture of the cover above. Jack of Hearts (and other Parts) by L.C. Rosen

Riverdale meets Love, Simon in this modern, fresh YA debut about an unapologetically queer teen working to uncover a blackmailer threatening him back into the closet.
Jack has a lot of sex -- and he's not ashamed of it. While he's sometimes ostracized, and gossip constantly rages about his sex life, Jack always believes that "it could be worse."
But then, the worse unexpectedly strikes: when Jack starts writing a teen sex advice column for his friend's blog, he begins to receive creepy and threatening love letters that attempt to force Jack to curb his sexuality and personality. Now it's up to Jack and his best friends to uncover the stalker -- before their love becomes dangerous.
Groundbreaking and page-turning, Jack of Hearts (and other parts) celebrates the freedom to be oneself, especially in the face of adversity.

Purchase Jack of Hearts by clicking the image of the book above. Soulful and uproarious, forceful and tender, Untamed is both an intimate memoir and a galvanizing wake-up call. It is the story of how one woman learned that a responsible mother is not one who slowly dies for her children, but one who shows them how to fully live. It is the story of navigating divorce, forming a new blended family, and discovering that the brokenness or wholeness of a family depends not on its structure but on each member’s ability to bring her full self to the table. And it is the story of how each of us can begin to trust ourselves enough to set boundaries, make peace with our bodies, honor our anger and heartbreak, and unleash our truest, wildest instincts so that we become women who can finally look at ourselves and say: There She Is.

Click the image of the book above to purchase the book.